Human Protocol provides the space for the creation of a new labor market in the form of a novel global network. It is the space that allows the formation, accommodation, and automation of the decentralized market.

Almost any job can be offered in protocol, and this is due to the team’s ability to solve the administration, evaluation of the jobs offered, and compensation of the tasks delivered.

The platform has a top-tier team behind it, and was co-founded by Harjyot Singh, and features cutting edge technology.

The first goal of the design is to reach a large volume of human feedback from the marketplace to ensure a good quality experience. Initial efforts have been concentrated on a novel machine learning protocol that can be made into a universally applicable toolkit.

Additionally, Human Protocol features aspects that will drive a high level of user engagement. Unlike many blockchain platforms, it appeals to the masses, much like NFTs or blockchain-based games.

What Human Protocol Does

To enhance decentralized labor markets and exchanges, Human protocol provides the base structure to organize, compensate and evaluate the human labor pools. It is a place where connections can be made, and real data can be easily gathered.

HUMAN brings the ability to search a pool of millions of workers with different abilities and at a lower price than regular workpools or websites. As a powerful platform for B2B Requesters, the job of finding more talent is easy if a workload increases.

For B2C, there won’t be anymore middlemen between the employers and workers. No one has to sign up on multiple platforms to apply for a job, and there are no platforms that take a cut of the final payment. Contact is made directly with the employer, making transactions simpler and better.

A Look at the Product

At this stage of the platform there are two ways to make connections, and the goal is to give each kind of user a different flow as the service grows. 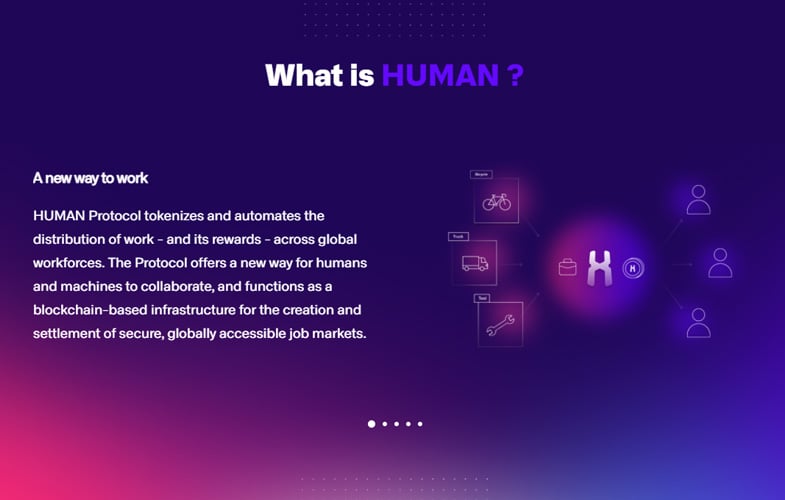 For Requesters and Employers

Before a requester offers a job, they have to purchase HMT. The Requesters must describe the job and choose which of the different job exchanges want to offer it. (For example; video image, text etc.). Finally, they submit the offer with the compensation for the job done and Protocol takes care of the rest. Only the requester can see the results and to cancel the job.

For Workers and Talent

By completing an application, the app gets an idea of a worker’s abilities. This combined with the employers needs create an effective way for workers to find job offers that fit their profile. Not only for now but for the future offers too. Once the user is verified the worker can start using the app.

Workers Can Arrive via Other Sites Too

In the case a job exchange website decides to incorporate Human Protocol the workers will be offering services through the app. The worker will not know about its interaction with the platform, but their profiles can be seen by any job site that wants to leverage the power of Human Protocol.

As the website expands globally, there will be more people using the platform. As a result, there will be a rise in the use of the HMT token, and fees work as the base of the revenue model. As the HMT token finds a wider user base, the company will not only gain from a rise in token usage, but also from the monetization of its token.

The Founder and Core Team

Human Protocol is creating new ways for people to connect, and use blockchain technology. Let’s take a look at the team that is making Human Protocol a reality.

Harjyot Singh is the Technology Director at Human Protocol. As an experienced engineering leader, he is in a great position to help Human Protocol make ideas happen. Singh has deep experience in finance and distributed computing. Singh has worked with multiple companies for over ten years before becoming an entrepreneur. Before Human, Singh founded two startups focusing on issues such as privacy and misinformation management.

Eoin Whelan began his career as a leading consultant for various firms throughout the finance industry. Among them PwC and EY. He became acknowledged as a financial design adviser developing skills in strategy, international tax laws and regulation for financial services and consumer technology companies.

For over two decades Alex created and led software engineering teams for various companies, most of those as a founder where he could target a specialization for database and distributed systems. His skills are well placed in the Human Protocol team.

HMT is the medium of exchange for anyone who is using the website market. HMT is created, transferred, and stored along the following lines on the platform.

The requester will purchase HMT and pay in advance for a job offer. The HMT is stored in a form of escrow that uses smart contracts. Work sourcing websites and workers earn HMT. They bid on HMT and receive HMT for a job that is done.

The exchange distributes work by workers’ reputation. The reputation is earned by the amount of HMT that the worker currently has or the highest amount that they have had. The exchanges gain HMT for matching workers with requesters.

Human Protocol already has a number of valuable tools on its platform. Here is some info on how it creates value via novel development.

The Ambassador Program is intended to compensate Human Protocol users for the promotion of the platform. The main goal is to educate their personal network to encourage the use of the Human Protocol. With all the interest in online work, this should be a winner.

Bots are now off the table (if needed). Requesters can know for sure that the applications will be answered by humans (or machines if that is preferred). Developers will know that the users are actually people due to the proof of humanity on the platform. This tool allows to check with over 100M users if a market event is real or not.

With the IMOO, Human Protocol will allow a huge amount of data to be collected, and be fed into a central oracle. The ways this could be used are endless, and extremely valuable.

Human Protocol — the Future of Jobs?

Looking for jobs online isn’t new – but the tools that Human Protocol have created carve out a niche for the platform in the market. It is especially nice to see the platform putting people first, and fading the influence of bots in online job markets.

With a solid team, and some great new ideas, Human Protocol is primed to thrive in the growing online job space. To learn more about Human Protocol – just click here!

Stars React to Will Smith Slapping Chris Rock: ‘Getting Under My Couch’